Heinz Buettikofer is web administrator and responsible for the online presence of the Canberra Swiss Club. 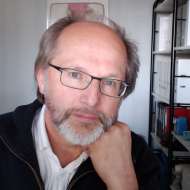 This user has not added any information to their profile yet.

Heinz is retired from CSIRO after working 36 years as experimental scientist and spatial analyst/cartographer on large inter-disciplinary research projects in the field of Land and Water.  During this time he has gained considerable expertise in delivering scientific research results online, which he now applies to the web presence of the Canberra Swiss Club.

Heinz has diverse interests such as bushwalking, reading, travel, photography and lately also aerial filming using his drone.  But his favourite passion is music.  Music of all kinds, depending on the mood of the situation.  Since the early 1980s he has devoted much energy to the Canberra Swiss Club including holding office as longest serving president from 2004-2014.  He is a founding member of the Crèmeschnitte Chörli since its inception in 2007 and participates actively up to the present.